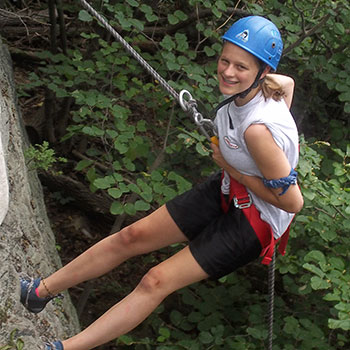 Rock climbing & rappelling has been a vital part of Jumonville’s summer camp adventure programs for over 40 years. Most of the rock climbing is done at a nearby area called Greenbriar which is just several miles from Jumonville. Older adventure campers have used Seneca Rocks as well as the New River Gorge. In past years we also occasionally used Coopers Rocks in West Virginia.

Rappelling or Abseiling, is the controlled descent down a rock face using a rope. Climbers use this technique when a cliff or slope is too steep and/or dangerous to descend without protection. Rescue teams are also known for using this method as a way to access injured or stranded victims. Jumonville has always taught this technique as a part of our rock climbing training and do not use it as a stand alone activity.